The Temple of the Great Contemplation

The Temple of the Great Contemplation (in Tibetan ཏིང་འཛིན་ཆེན་མོ་) was conceived, designed, and developed by Chögyal Namkhai Norbu and inaugurated by His Holiness the Dalai Lama in May 1990.

Situated on a gentle rise, it is crowned by surrounding hills, commanding an auspicious position at the center of a valley between two mountains steeped in legend: Monte Amiata and Monte Labro. The position was carefully selected in consideration of the criteria of Tibetan geomancy.

Constructed in wood, glass, and copper, the temple is decorated in a style drawing on traditional Tibetan artistry, and yet is totally unique due to its octagonal shape, the choice of materials, and the figures and symbols represented.

Usually, we simply refer to the Temple of the Great Contemplation as “the Gönpa,” a Tibetan word meaning “a secluded, silent place,” a perfect description for the kind of environment that is ideal for anyone wishing to dedicate themselves to contemplation.

Gönpa is a term that can be used to refer to any temple, large or small, and indicates a place dedicated to spiritual practice and collective activities.

The principal entrance to the Gönpa faces the east, where the sun rises and where the Buddha turned his gaze in the moment of enlightenment. The exterior is decorated with astrological and protective symbols, and with syllables and mantras in an ornamental script called Landza, predominantly used in Tibet to reproduce Sanskrit. 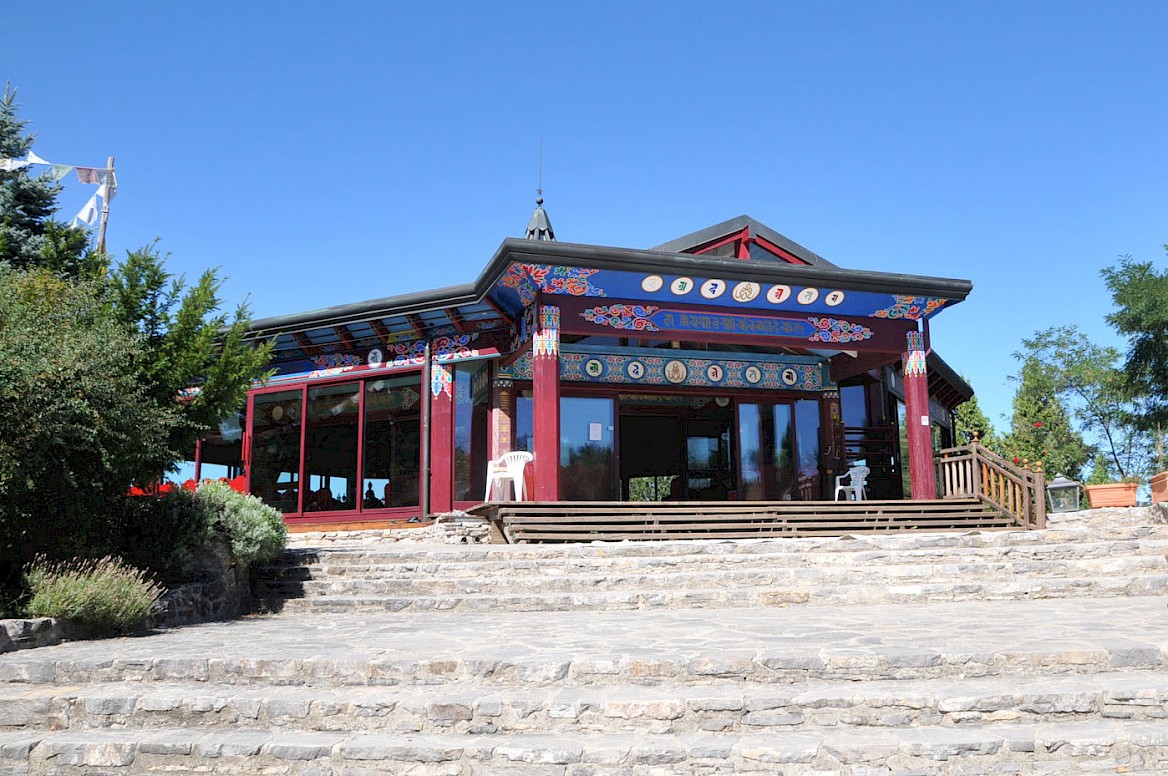 For example, the sipaho diagrams painted in gold on the columns on either side of the entrance are considered to prevent and liberate from adverse circumstances. Mantras inscribed above the portals have the function of purifying and favorably influencing whoever enters.

Moreover, each of the panels facing the eight directions is ornamented with the syllable connected with the subtle beings considered to preside over that spatial domain. Inside, the eight sides of the temple are adorned with exquisitely painted representations of masters from various Buddhist and non-Buddhist traditions. All of these masters were selected by Chögyal Namkhai Norbu for their direct connection with the Dzogchen teaching. Of particular relevance is the western panel, painted with great virtuosity by Dugu Choegyal Rinpoche, a world-renowned Tibetan master and artist. Depicted here are Samantabhadra (in Tibetan kun tu bzang po) and Vajrasattva (rdo rje sems dpa'), as well as the Twelve Primordial Masters of Dzogchen, the origin of this teaching, the last of which is Buddha Śakyamuni. On the outer left of the same panel is Shenrab Miwo, the founder of Bön, the pre-Buddhist tradition of Tibet. 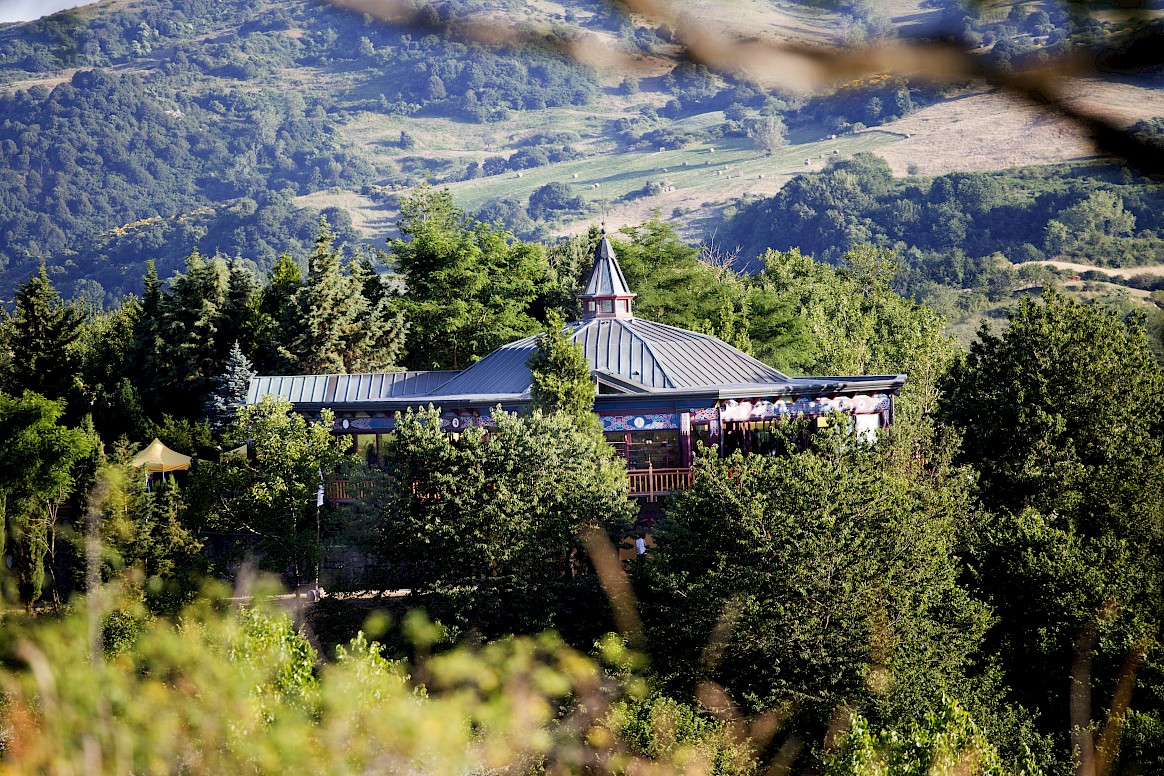 In the southwest are masters from the Dzogchen Semde lineage, with Garab Dorje at the center; in the south are masters of the ancient school, Nyingmapa, with Guru Padmasambhava at the center flanked by Mandarava and Yeshe Tsogyal; on the north side, around the central figure Machig Labdrön, are treasure discoverers who like her are connected with the Chöd teaching. The northwest is dedicated to masters related both to the Bön lineage of Dzogchen and to Buddhist Dzogchen, and it is in this sector that two of Chögyal Namkhai Norbu’s principal masters are found: Rigdzin Changchub Dorje and Ayu Khandro. In the southeast are masters from the Kagyüpa school, with Marpa and his famous disciple Milarepa in the central position; on the northeast panel appear the Sakyapa masters, with Sachen Kunga Nyingpo at their center; and finally, on the eastern panel we see masters of the Kadampa-Gelugpa school, with its supreme head, H.H. the Fourteenth Dalai Lama, Tenzin Gyatso. 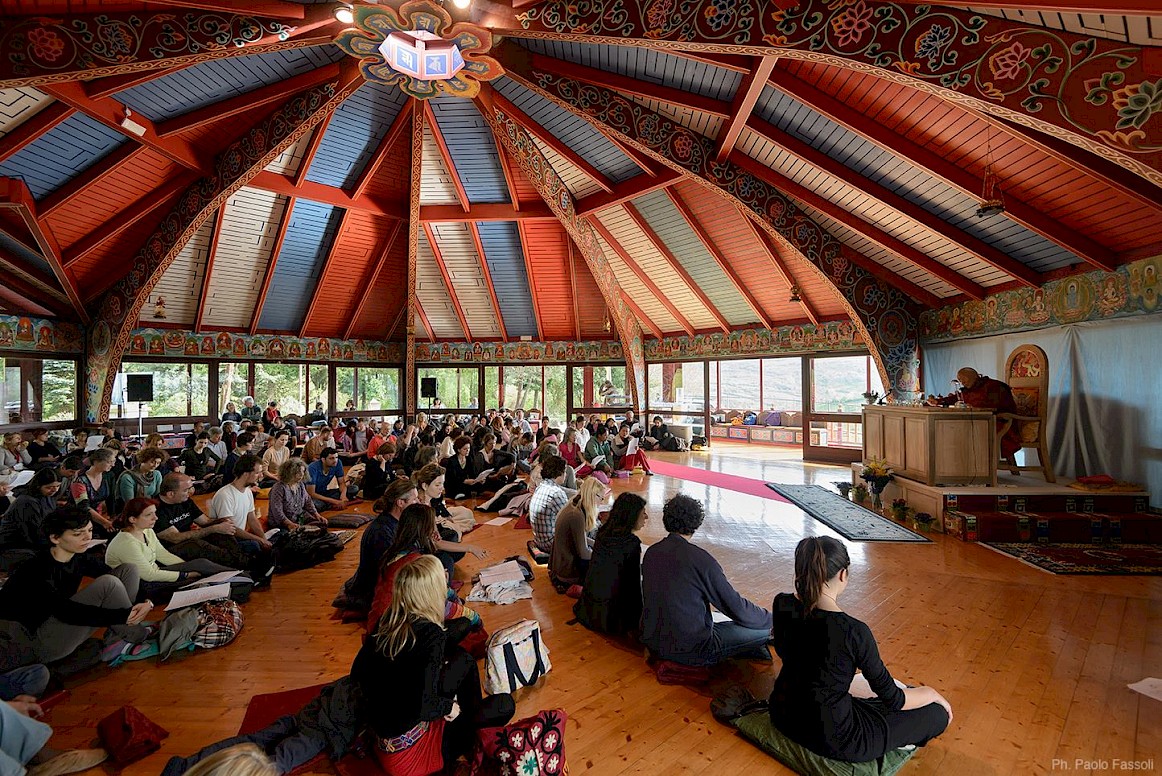 On the ribs supporting the vault are paintings representing various divinities in peaceful, wrathful, and joyful aspects, along with the Tibetan syllables related to each. Finally, on the vault, rays emanate from the eight-petalled lotus flower at the center and define eight triangles with their bases oriented in the eight directions of space. The triangular sections are inscribed with mantras from the most important secret tantras of Dzogchen; they are written in a special script, a stylized and angularized version of the Tibetan alphabet called Phagpa after its creator, Drogön Chögyal Phagpa.

You can find in-depth descriptions of the Gönpa, its symbols, mantras, and decorations in the richly illustrated monograph titled The Temple of the Great Contemplation, available from Shang Shung Publications. The book also contains biographies and descriptions of all 146 masters and protectors represented in the Gönpa.