In Merigar there are two different types of “prayer flags”: the lungta (rlung rta) and the tarchog (dar lcog). The lungta are the five-colored flags that we hang horizontally between high poles at Merigar, while the tarchog hang along those same poles but vertically. 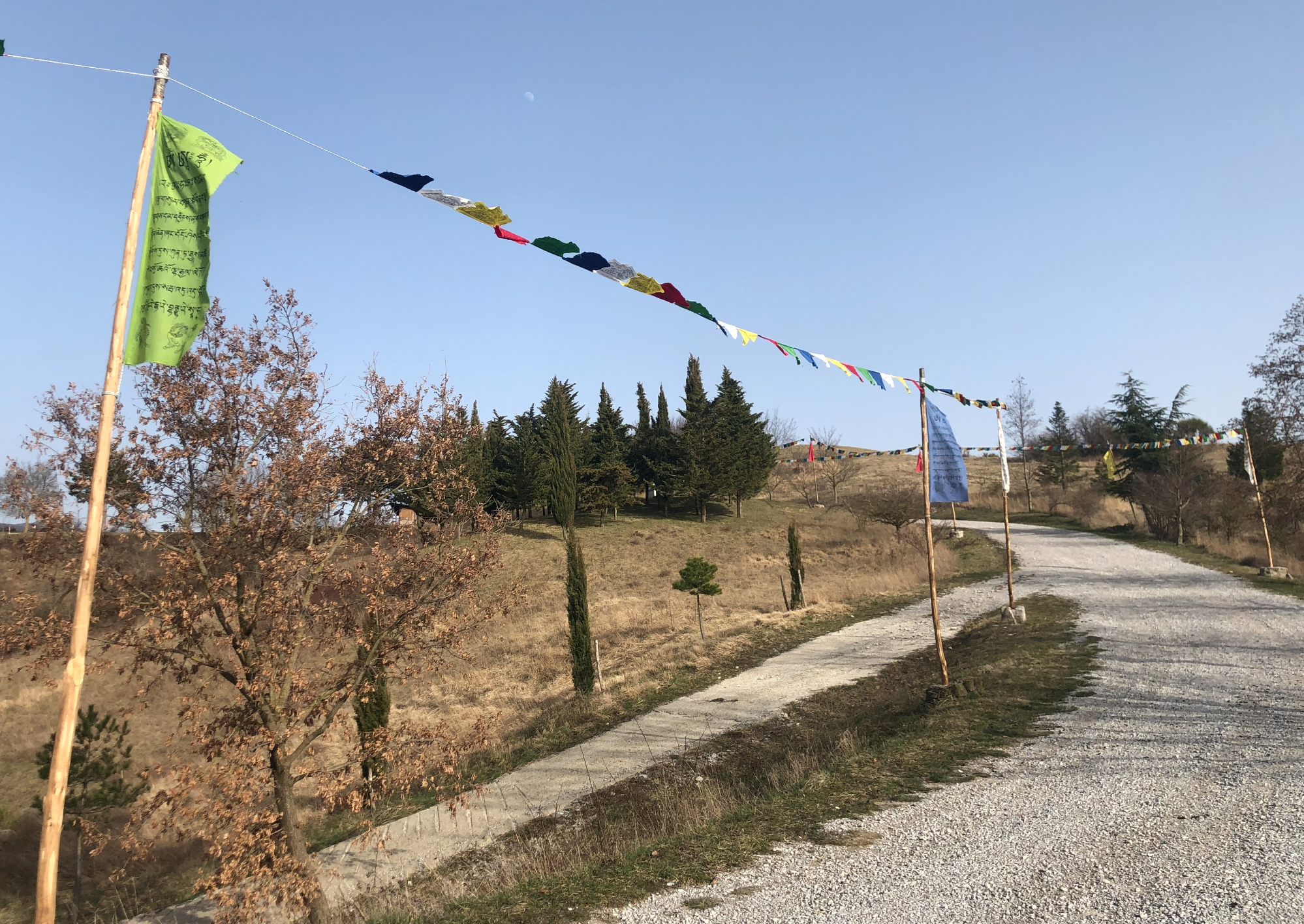 Chögyal Namkhai Norbu explained several times about the meaning and function of the lungta and described the symbols related to the images that are represented on them. Among his books, he wrote in particular about this in Drung Deu and Bon and in the first volume of Light of Kailash. There is also a specific booklet on lungta dedicated to practitioners that you can consult. Furthermore, in a study published in Tibetan in 1966 as an appendix to the second edition of Tibetan Folk Songs by Giuseppe Tucci, Chögyal Namkhai Norbu described various Tibetan traditions and customs among which he also indicated some uses and functions of the lungta and tarchog. 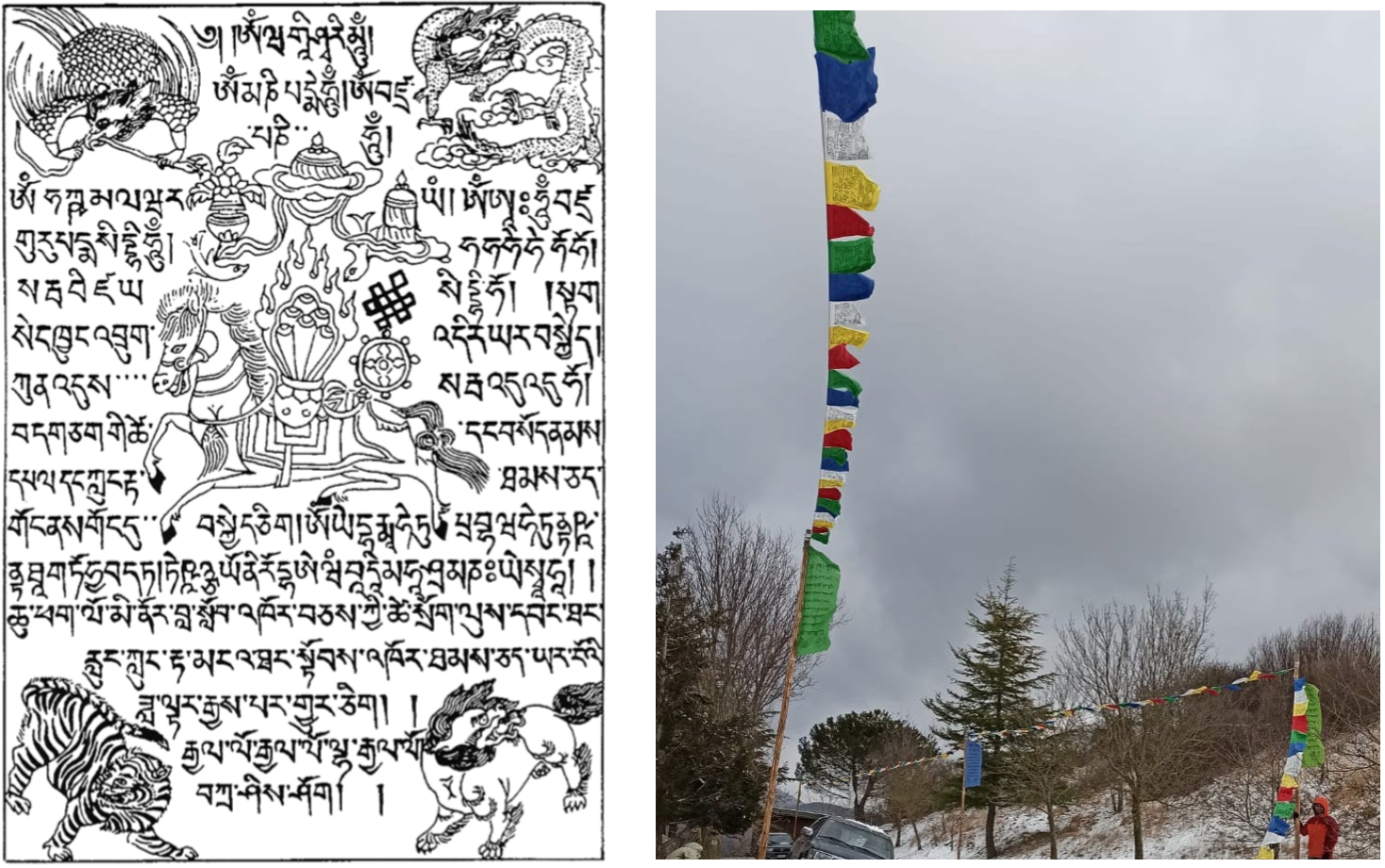 On the lungta we use at Merigar there is a horse in the center facing left with the wish-fulfilling gem on his saddle. In the corners there are four other animals: a tiger, a lion, a dragon and the Garuda. In Drung Deu and Bon Chögyal Namkhai Norbu explains that the tiger represents the element of wood or air, the lion represents earth, the dragon water, and the Garuda the element of fire. He also explains that the animals are used as symbols and the elements are not represented directly to indicate the active, living function of the latter.The term lungta also refers to vital energy, the most important protective force of the individual. On an astrological level, this aspect is often translated as fortune and is influenced (i.e. harmonized and favored) precisely by the practice of helping to create and hang prayer flags.

The tarchog, or vertical flags, can be of various types and have different functions. They can, for example, influence long life, promote purification, become an omen for future lives or other. Printed on the tarchog of Merigar is an invocation written by Chögyal Namkhai Norbu in 1990, surrounded by a tiger, a lion, a dragon and a Garuda.

Text of the invocation on the tarchog:

The three roots, protectors of the teaching, divinities of fortune
From space I urge you to keep your promise!
The precious culture of Shang Shung and Tibet
May it spread in all times and directions!
ki bswo cha’o! May the deities triumph!
May all [positive forces and prosperity] unite!

How the prayer flags are made at Merigar

Periodically, the new prayer flags are printed on cotton by specialized companies in the Como area of Italy, then arrive at Merigar in large rolls to be cut up. Once cut, the flags are sewn by hand on site using cotton thread, without making knots in the thread, as our Rinpoche taught. The order in which they are arranged is what in jung-tsi astrology is defined as the mother-child sequence, that is, wood-fire-earth-metal-water, which correspond to the color sequence of green-red-yellow-white-blue. These five elements and their correspondence with the colors indicated are characteristic of the jung-tsi astrological system and are not the same as those used in other astrological systems or in Buddhist philosophy, but correspond to those used in Tibetan medicine.

Before the end of the Tibetan year, the old flags are taken down, removed from the ropes and burned during a fire puja on the twenty-ninth day of the last month of the Tibetan year. Every year the old flags must therefore be removed before the New Year and new ones put back only after Losar. This has the purpose of harmonizing the elements of the new year. Since the flags of the previous year are burned, it is of fundamental importance that they are made of pure cotton, as burning synthetic fibers creates dark polluting and unpleasant smoke. Even the fragments of the flags that come off during the year should, if possible, be collected and burned. The ropes, on the other hand, are reused, so they can be made of non-natural fibers.

Once ready, at Merigar the new prayer flags are traditionally authenticated during the Ganapuja on Losar, the first day after the change of the animal and of the elements relating to the year. Then they are hung in the morning starting from the third day of the first lunar month, after the Sang, until the full moon. They then continue to be authenticated for the rest of the year, always on the waxing moon, and hung at the same time, usually in the morning.

Chögyal Namkhai Norbu's instructions regarding the location of the prayer flags were not to hang them on buildings. To respect this indication at Merigar they hang the flags between poles specially placed along the paths that connect the various buildings.

History of a tradition

The tradition of  hanging flags at Merigar probably dates back to 1982, right after the land was bought. In fact, in that year the first large tarchog flag with several handwritten mantras was hoisted in Merigar; the same year, several colored flags began to wave between the trees. A special year was 1984, when the lungta were prepared and hung to mark the beginning of the wood mouse year, the first of the sixty-year cycle (rabjung). 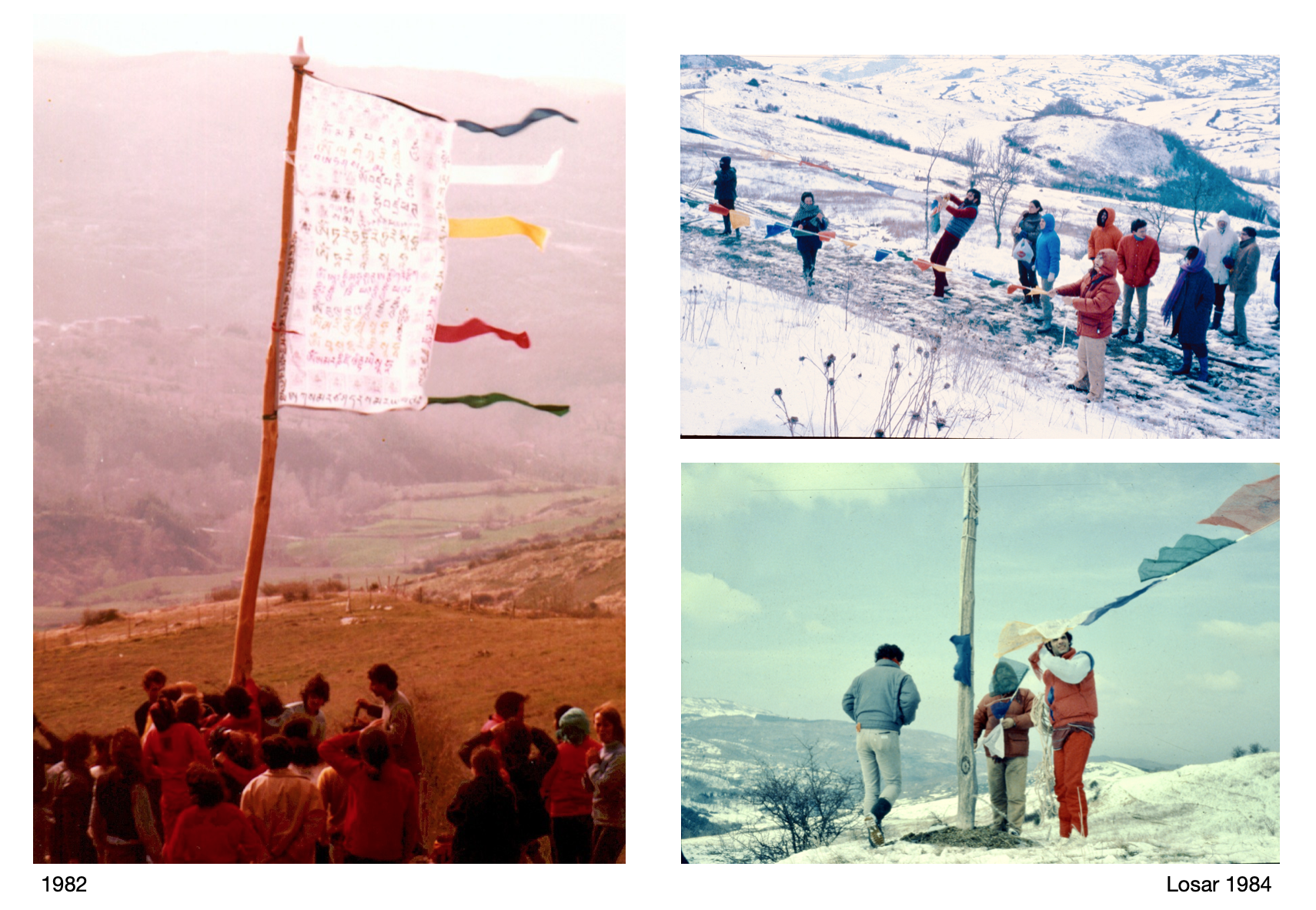 Also, as we were able to reconstruct, in 1985, a student returning from a trip to the East brought to Chögyal Namkhai Norbu, who at that time was teaching at the University of Naples, a gift of wooden blocks for printing prayer flags. On that and subsequent occasions the Master explained that preparing lungta is an excellent way to harmonize the elements related to one’s birth year with those of the current year, in particular when there are unfavorable conditions for one’s energy, such as when the animal of one’s year of birth occurs or the year of the opposite animal (dunsur). In that case, the person is advised to arrange and sew the flags starting from the color relating to his/her element of life and then proceed according to the order of the mother-child elements explained above. Then the person should continue by sewing the number of flags corresponding to his or her age counted in Tibetan style, that is, counting both the year of birth and the current year. The number of flags will thus be greater than one’s age as calculated in the West by one or even two.

So, in that period the printing and sewing workshop for these flags at Merigar started, inside and outside the yellow house. From then on, it has always been like this in Merigar: no ready-made flags have ever been bought, but every year they are carefully prepared by hand.

The first years the flags were printed at Merigar using wood blocks. An important change took place starting from 1990, when, for the imminent arrival of the Dalai Lama and the inauguration of the Gönpa, a great number of flags were needed that had to be hung not only in Merigar, but on the road leading to Merigar and also in Arcidosso as well as Grosseto. On that occasion, the tarchog, the long flags that hang vertically along the poles, were also prepared for the first time, and the Master personally wrote the mantras and the invocation that is inscribed there. Tarchog were placed along the road going down to the Gönpa and lungta were hung horizontally.

In order to achieve the required number of flags, for the first time companies in the Como area specialized in printing on fabric were used. Since then, these companies have taken care of this first step and the flags arrive at Merigar in large rolls to be cut and then sewn on site.

At the beginning there was no particular collective ritual to burn the old flags; the fire puja of the twenty-ninth day of the last month of the lunar year was introduced in February 2017, before the start of the Fire Bird year..

Help us remember more! If you have information, memories, photos and stories related to the prayer flags of Merigar please write to library@dzogchen.it