An Inexhaustible Treasury of Knowledge

The library was originally created from the need to preserve the texts that Chögyal Namkhai Norbu brought with him from Tibet and the works he accumulated in the course of his studies. The collection is now accessible to scholars, practitioners, and also to those who are simply interested in certain aspects of Tibetan culture. It is one of the only libraries of its kind in Italy and in the Western world, so it was only fitting that this treasure was developed and made available.

The library is open to the public. There is also a loan service for most of the texts on display in the reading room. Come visit us next time you are at Merigar!

The Zikhang library was inaugurated on 29 May 1990. It is a Tibetological library and contains at present more than 12,000 volumes. Its Tibetan section contains more than six thousand books and magazines, including dozens of unique manuscripts and thousands of volumes (mainly xylographs) in traditional format. There is also an important section in Western languages ​​(mainly English and Italian), with both academic and educational publications on Buddhism, Tibet, India, and other topics, as well as in other Asian languages ​​(Chinese, Mongolian, Japanese).

It is possible to visit the library for consultation and bibliographic research, and also to ask to be guided through the book heritage, deepening themes such as the Tibetan language and writing, the traditional book and Buddhist literature.

from Why Merigar? film by Gabriella Moles

The Zikhang Library at Merigar serves as a center for culture, above all Tibetan culture, and, over the years, several events have been organized, mainly related to the study of Tibetan language and calligraphy.

Also, a new initiative – Library Talks (Racconti in Biblioteca) – started on August 4, 2018. Thanks to the valuable offers of knowledge and experience given by various scholars, experts, teachers, and enthusiasts in the Dzogchen Community, we have been able to create a series of cultural meetings, open to the public, useful to deepen and learn about different themes, such as the lives of the great masters, ancient and contemporary, Tibetan calligraphy and books, Yantra Yoga, and Tibetan medicine.

With these Library Talks we would like to expand our cultural contribution, and, at the same time, ensure that more and more people can come the Library and start to use it.

In 2019 the project Working with the words and texts of Master Chögyal Namkhai Norbu and Tibetan Buddhism carried out with the contribution of the UBI (Italian Buddhist Union), involves the Library and Shang Shung Editions.

The skillful renovation work of 2012 brought about larger rooms that were comfortable and pleasant. The reading room is decorated in Tibetan style, while the surrounding shelves display works that deal with different aspects of Tibetan culture in various Western languages organized by topic and available for consultation. 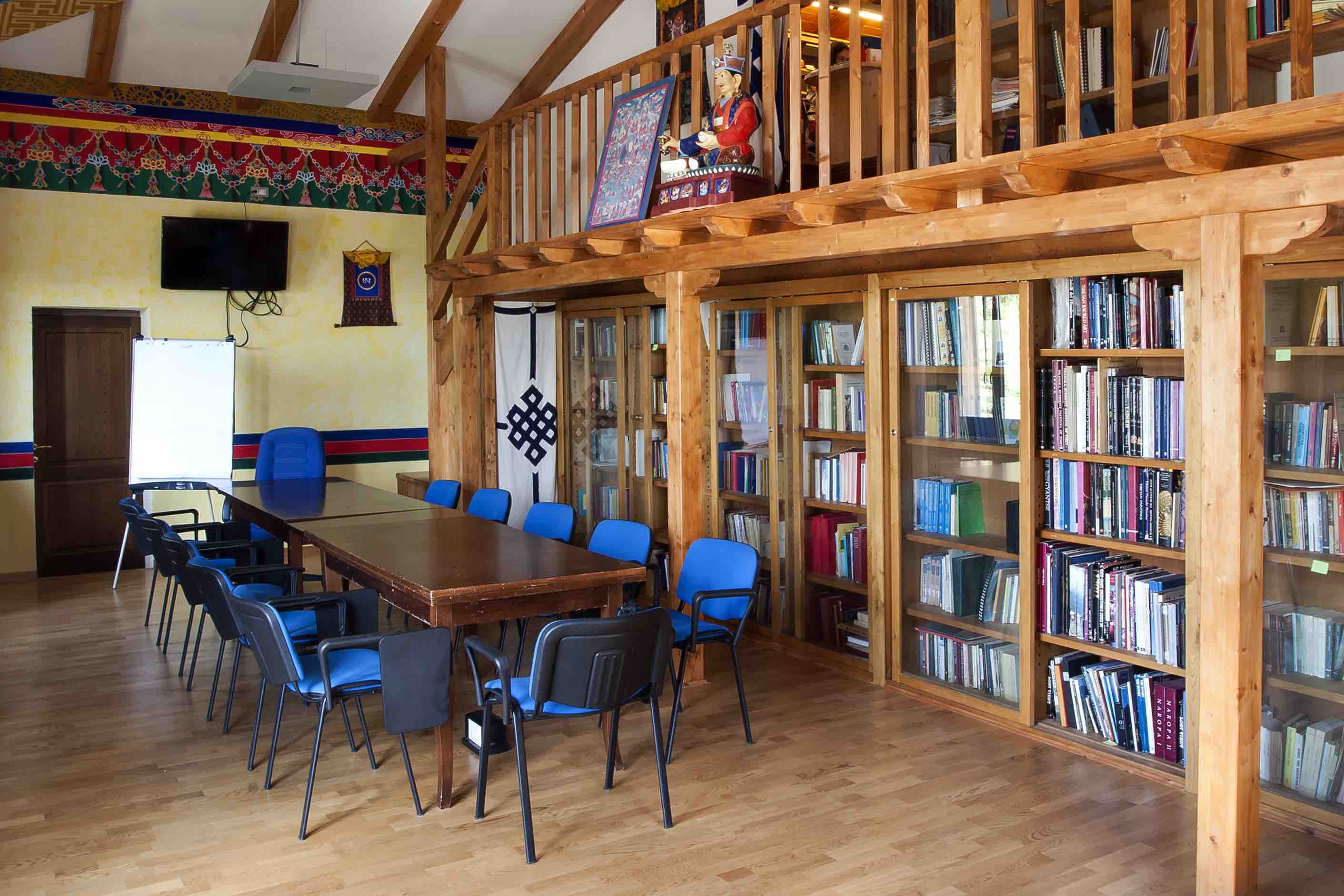 For the section of texts in Western languages ​​the main idea was to order the texts according to the Five Traditional Tibetan Sciences (rig gnas lnga): the first part focuses on the Dharma, the teachings, in turn divided into Sutra (Hinayana and Mahayana), Tantra, and Dzogchen and then into different Tibetan schools (Bon, Nyingma, Kagyu, Sakya, Gelugpa, and so on) with a section on biographies. The second section is on Tibetan language and grammar, followed by a section on medicine and the arts (visual arts, music, dance) and a small collection of texts on Logic. In addition to these five sections divided according to the five sciences, we have a section on places of pilgrimage, and a shelf dedicated to India, Nepal, and Mongolia. There are also sections that contain scholarly works (such as a large collection of East and West magazines and other publications from IsIAO/IsMEO in addition to Tibet Journal) and one with the works of authors of the Dzogchen Community. Sections on Chinese Buddhism, Zen, and China in general will be exhibited later in new shelves.

A wooden staircase leads from the reading room to a balcony with shelves dedicated to manuscripts and texts by Chögyal Namkhai Norbu, including his works published in Tibetan. Publications from the early years of the Dzogchen Community are stored here as well, along with books published by Shang Shung Publications and their translations into various languages. 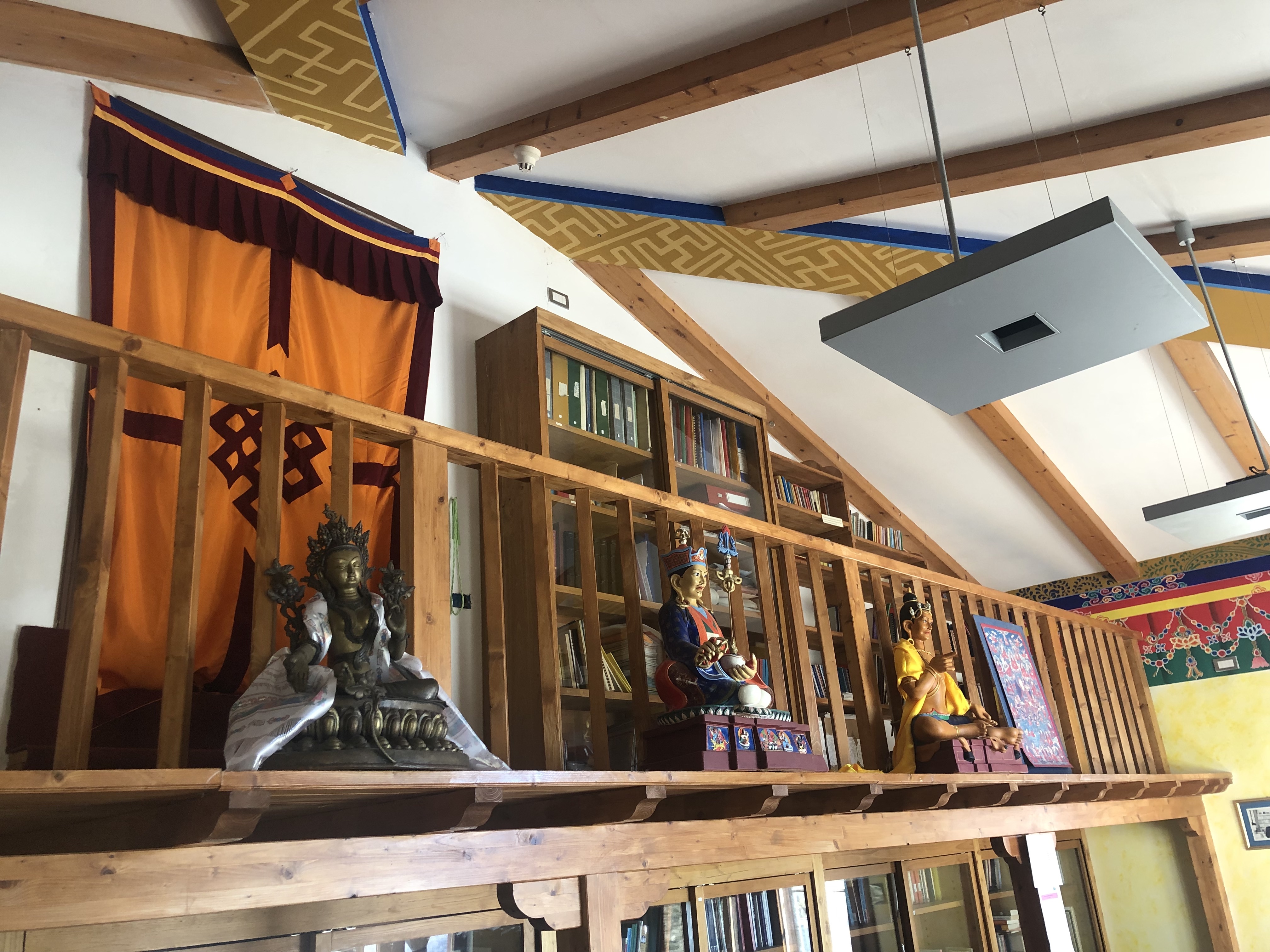 The upper floor continues into a separate area housing Tibetan texts, including the main collections of the various traditions of the Land of Snows, such as the Bon and the Buddhist canons, the tantras of the Ancient School, the fundamental texts of Dzogchen, the complete works of Longchenpa, of Adzom Drugpa, of Shabkar, and of Lopon Tendzin Namdak as well as a section with the manuscripts of Changchub Dorje and those of the Master.

More than 2,000 works are in traditional Tibetan format (dpe cha), namely woodblock prints or manuscripts, or copies of them made on paper made from different organic materials depending on the location and time of production.

These texts generally consist of unbound sheets that are rectangular and read horizontally. The page is changed by turning the sheet on the upper horizontal pivot (which means that the back of the sheet has to be upside down in relation to the front). Since they are not bound these texts are wrapped in squares of cloth (dpe ras) with cloth strings that guarantee the compactness of the text and its preservation. In our library, many of these fabrics have been brought directly from Tibet or from the areas of the diaspora, in India; others were produced locally.

In addition to the texts in traditional format we have a good collection of works bound in Western format, called deb in Tibetan.

Besides the works of Changchub Dorje and those of the Chögyal Namkhai Norbu, this shelf contains another 39 manuscripts  whose dating and origin is still under study.

In the catalogue only the texts of the Tibetan section are available at present. Expanding on the previous inventory, in addition to the title, the author’s name and the number of pages, the new catalogue is enhanced with reference to the codes assigned to the same work by the Tibetan Buddhist Resource Centre (TBRC), the largest online library of Tibetan texts, and by the Library of Congress. This makes it possible to search through the catalogue also using a single code used by the TBRC and the Library of Congress. It also generally provides a brief description of the content and keywords; where necessary the table of contents (dkar chag) has also been entered. You can request partial scans of the texts by contacting the librarian, Margherita Pansa who can also guide you in visiting the library and library research. 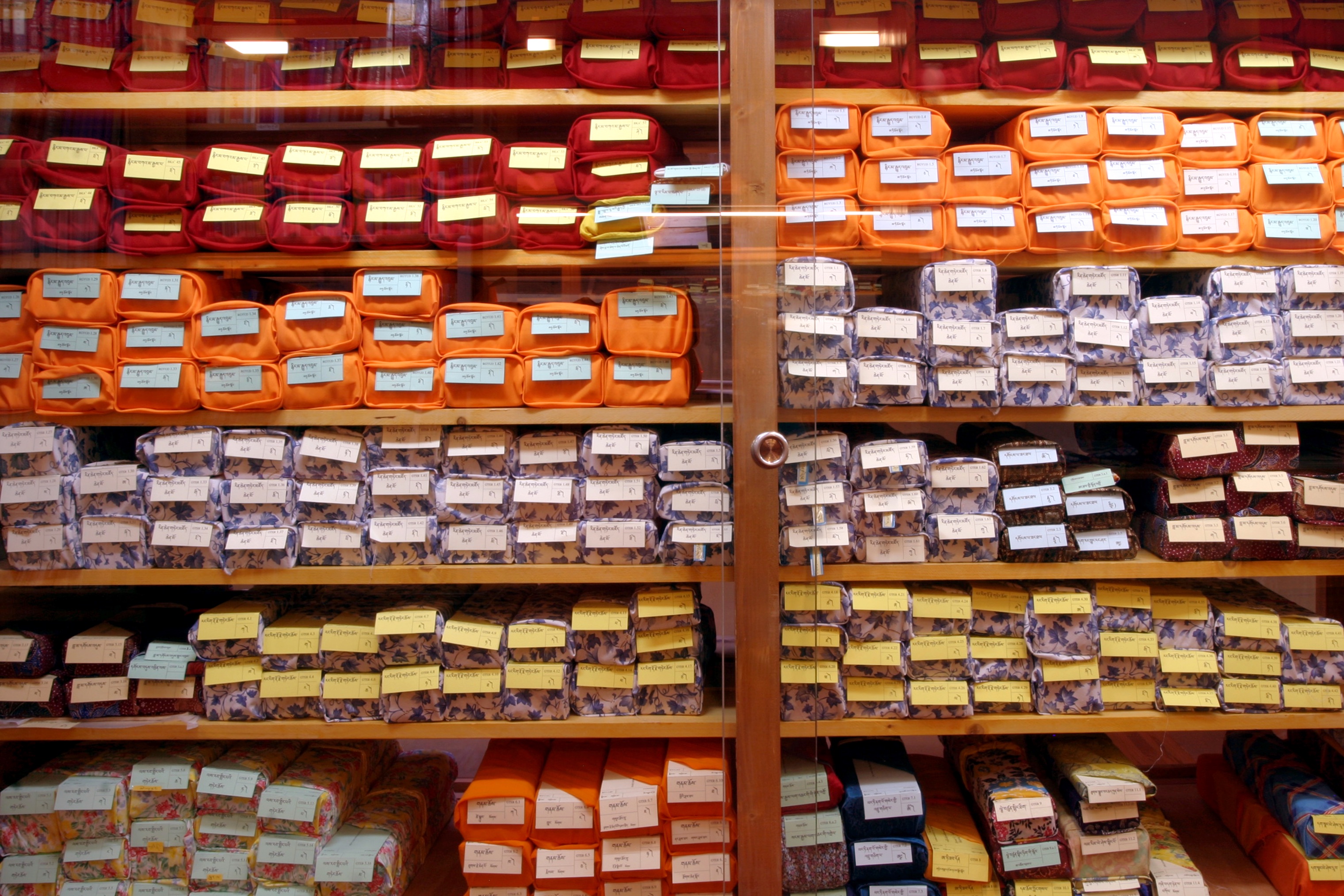 Join our work and support the cataloguing and accessibility of the Zikhang Library.